According to a study published a month ago in Science Advances, the earth is in the midst of a mass extinction, one that rivals the extinction of the dinosaurs some 65 million years ago. The study reveals that since 1900, 69 mammal species and another 400 vertebrate species have gone missing. It goes on to state that mammals in particular are disappearing 20-100 times faster than in the last few centuries.

I cannot resist the parallels of this study and a phenomenon I believe is occurring right under our noses in the world of business. The autocratic, big ego, command and control type of leaders (aka the Jerks) seem to be meeting their end, much like other species that are disappearing. 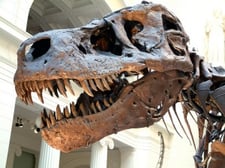 Of course, there are still plenty of big-time Jerks leading businesses. Like the extinctions happening in our eco-system, species do not just disappear overnight. But when I consider how many Jerks I personally encountered 25 years ago vs. today, I am pretty certain they are falling by the wayside at a rapid pace.

Perhaps concepts like Level 5 Leadership from Jim Collins, and the power of creating “Trust” from Stephen Covey and others are taking hold. For sure, the portrait of today’s most admired group of leaders is much kinder and gentler, heralding “positive rewards” and “collaboration” vs. the old “carrot and stick” methodology. Even proponents of driving more “accountability” tout collaboration and communication for moving teams forward. Traction by Gino Wickman is a great example of this philosophy.

Or maybe it’s just that the business world has been influenced by the speed and accessibility of technology. In the old days, people were just glad to play online casino österreich so they could support their families. Today, if people don’t like the boss they work for, they can go online, scan through the openings and make a move.

Whatever the reason, the world around the Jerks has changed and they simply have fewer and fewer places to practice their craft. You’ve probably seen and heard some of the remaining Jerks out there:  they say things like “employees today are just not as loyal as they used to be” or “this new age is just lazy and entitled.”

While there certainly are entitled employees (there always has been), I just think people today have too many options and are too knowledgeable to keep working for Jerks.

Having 25+ years of experience, put me down as someone who likes how business is evolving. I have worked for a few Jerks over the course of my career and I am certain I was less effective under their watchful eye and sharp tongue. I believe that hiring and keeping great employees will be business’ greatest challenge as this century moves forward.

So be warned, if you own a business and employ Jerks on your leadership team, you’re probably leaving money on the table and hurting your prospects for growth. If you’re a Jerk yourself, watch out, your days are likely numbered.